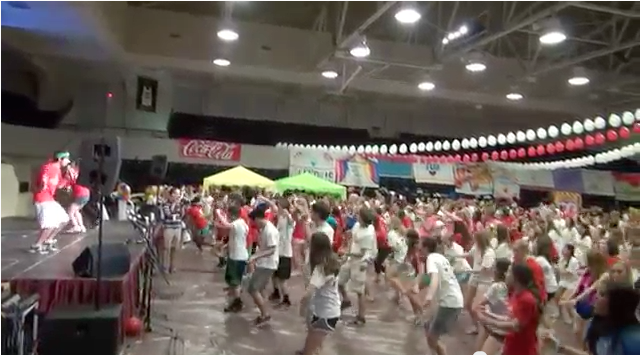 Play dough, yoga and even a rave. It may seem like just a party, but for some it’s much more.

This was the biggest turnout yet for Elonthon, with more than thirteen hundred students participating. Volunteers danced as the hours passed, and after six hours, they weren’t slowing down. With eighteen hours left, we continued to see how they fared.

Elonthon was more than just fun and games though. Patients treated at Duke Children’s Hospital told their stories and shared their hardships onstage with the crowd. Claire Little, a survivor of Supraventricular tachycardia, a rare disease that affects the outside of the heart, spoke onstage, and later explained to us how it feels to be in remission.

“It’s wonderful, I gotta thank God each day for, you know, blessing me with Duke Hospital being able to perform the surgery that they were. So it’s great, I’m feeling good,” said Little.

Another inspiring story was told by Holly Barber, the mother of Matheson, a four-year-old Leukemia survivor. She described to us how it felt to have Matheson now be cancer free.

“We believed that the Lord was going to heal him and that he was going to use Duke to do that. We didn’t know, until I mean you don’t really ever know, it’s just one day at a time and every day out it’s good. But here we are, three and a half years and so we’re just really thankful for everyday,” Holly stated.

The patients and participants who attended Elonthon enjoyed all that the event had to offer. Elonthon’s committee worked hard to make sure the 24-hours were fun-filled with arcade games, sunrise yoga, and a silent disco to keep students moving during the night.

In the final stretch at Elonthon, students had been standing for eighteen hours. If students needed an extra burst of motivation, there was an Inspiration Tent: a place to read stories of Miracle Children and to write notes to the kids they are helping. It helped motivate students to keep moving for those who cannot.

Last year Elonthon raised around 105,000 for the kids, but the committee says they doubled that amount this year. It was a happy ending for all who participated in Elonthon with the grand total raised being over 200 grand.