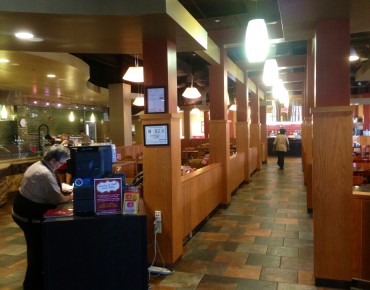 An Alamance County health inspector cited Colonnades Dining Hall for having undercooked food and mold in the ice machine. As a result, Colonnades received an 82 health inspection score. The score was updated to a 95 after a re-inspection. Lakeside Dining Hall also received a below-average inspection rating of 90. http://elonlocalnews.com/2013/09/colonnades-dining-hall-recieves-multiple-health-violations/

The 1889 Grill Room was included as a part of Colonnades Dining Hall in the inspection report.

According to the health inspection report, heavy mold buildup was inside an ice machine and a few dishes stored were found dirty.

The inspector also wrote that a Colonnades Dining Hall employee dropped a knife on the floor, picked the knife up and continued food handling duties without washing their hands. The report also states that multiple employees washed their hands for less than 20 seconds and used bare hands to turn off faucets.

The shrimp gumbo also had to be thrown away because it was left out for too long without being reheated.

A bag of leaf lettuce had to be discarded because it was held for nine days, which is four days past the hold time.

Also, cheese, butter, granola, salad toppings and cookies were left sitting out without a sneeze guard.

Wet rags on food prep areas and buckets did not contain an adequate amount of sanitizer to submerge the rags in buckets.

Many items were stacked wet.

Marketing Manager of Aramark, Katie Nelson, told ELN today she is aware of the inspection score and Elon Dining is working quickly to respond to the issues.

The health inspector will be back at Colonnades on September 27 to see if progress has been made.

Stick with us for more information.

Lauren Cook contributed to this report.