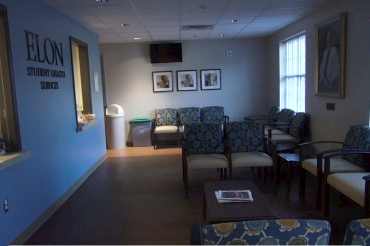 This year, Elon’s population expanded to 5,357 students. With the growth in student enrollment, comes a growth in campus infrastructure, according to U.S. News and World Report.

Dr. Archinal was referring to the new R.N. Ellington Health Center, a 14,000 square foot building, located in South Campus across the train tracks.

“Elon has given us this great new facility,” Archinal said. “I love the fact we’re in the building with other parts of student life. The physical health isn’t separate from the emotional health and the other stresses that students have.”

The health center now has nine medical exam rooms, a procedure room for treatments like IV fluid injections and a pharmacy.

The waiting room is much larger than the previous R.N. Ellington Health Center’s. Elon is making an effort to cut down on student wait times.

If the wait is going to be longer than about fifteen minutes, the receptionist will send the student away with a new time in which they can return for an appointment later that day.

Elon partnered with Alamance Regional Medical Hospital in hiring and setting up the new center.

“It’s nice to have the support of the hospital if I have clinical concerns or questions,” Archinal said. “Not sure whether I’m doing something the way I should be…I have the hospital to call on.”

Some voiced concerns when the health center’s location was announced.

“It is a walk,” Archinal said. “I think having to come under the railroad tracks and through that tunnel is certainly psychologically a long way.”

Archinal acknowledges that most students do have a car on campus. But, if you’re too sick to walk over, Dean of Student Health and Wellness Jana Lynn Patterson has a small golf cart that will pick you up if you’re seriously ill.

“It’s recognition of ‘yes, we know this is a change,’ but we’d like to help you get here,” Archinal said.

Despite early concerns that the location would deter students, Archinal said the health center has already seen plenty of patients.

In order to ward off the disease, Archinal firmly believes in hand sanitizer.

“If I could have hand sanitizer by every door, in every dorm room for every student, we probably wouldn’t be as busy here.”