Elon, North Carolina|Thursday, January 26, 2017
You are here: Home » Health » Researching to Save Lives

Researching to Save Lives 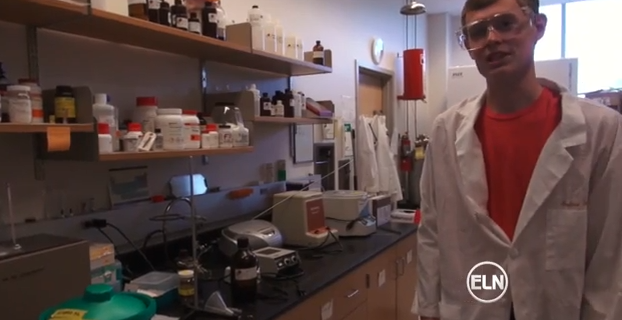 15 students from the class of 20-14 were awarded the Lumen prize, a 15,000 dollars scholarship that helps fund various academic endeavors. Senior Andrew Fischer was one of the recipients.

“Growing Up, I saw my grandmother slowly succumb to Parkinson’s disease,” said Fischer.

For Fischer, the scholarship was more than just an opportunity to pursue undergraduate research, it was a chance to save lives.  Andrew Fischer’s Grandmother lives just five minutes away from his home in Maryland.

“I would always go over and play board games or cards with her. We were very close, because we lived so close.”

Fischer found it difficult to watch his grandmother struggle with the symptoms.

Along with the loss of physical functions, people with Parkinson’s can lose their speech abilities and show signs of dementia.

“I’m sure it’s very frustrating to have your ability to move and live be taken from you and know, there’s nothing really you can do about it.”

Fischer decided he wanted to help. He found out about the Lumen Prize his freshman year and applied during his sophomore year.

“Coming into college, I was focused on that, because I really wanted to make a difference in her’s and other’s lives.”

Fischer is looking at the aggregation of proteins in Parkinson’s Disease. He hopes his research will help meet the goal, a cure.

“I think there is lots of research, but what the field needs is some more creative angles to look at the disease, a real break through to happen.”

“Research is always an uphill battle and sometimes you run into obstacles, but kind of taking a page out of her book, in the face of things that seem difficult, she always tries to keep fighting and that’s something I try to do in my life as well.”

Fischer’s dream is to eventually practice medicine, but he also hopes to continue his research after Elon.