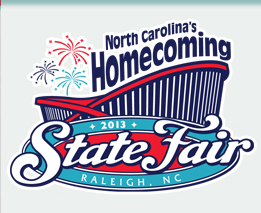 The annual event has changed since it first opened in 1853, but the atmosphere hasn’t. Smells of popcorn, cotton candy and fried foods waft through the air as fair-goers wander around.

People of all ages can win prizes, eat deep-fried foods and brave carnival rides with stomach-turning drops and turns at this year’s Homecoming-themed fair.

Fair-goers can also test their luck in a variety of carnival games like basketball, ring-toss and balloon darts to win a prize from as big as an over-sized stuffed animal to a little goldfish. But be prepared to spend a lot here – the games prove harder than they look.

But preparations for next year’s fair are already in the works and the date has been set: The North Carolina State Fair will be back in Raleigh from Oct. 16 to the 26 in 2014.