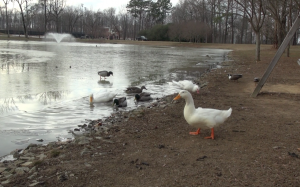 Water fowl populate the areas surrounding each of Elon’s three lakes, leaving behind droppings that affect the water’s quality.

But as environmental studies majors know, these lakes contain a fair amount of bacteria such as e. Coli, as well as fecal matter from ducks and geese. And according to Tom Flood, director of landscaping and grounds, that’s not all they contain.

“Students have been known to throw bicycles, computers, couches and other objects down into the lake, which we never know are there until the water levels fall really low,” Flood said.

“You don’t want to baptize a baby in it.” - Avery McGaha, senior environmental studies major

Because of both the items found in the lake and the nutrients and bacteria that feed into it, Flood said that the lake is not a potable water source.

Senior environmental studies major Avery McGaha said that while these lakes are not the cleanest, they are clean enough for the purpose they’re meant to serve.

“As soon as you start down a path of investigating water quality, it’s all based on what you use it for, and this is perfect for stormwater and irrigation, but you don’t want to baptize a baby in it,” McGaha said.

While the Polar Bear Plunge may come back at some point in the coming years, Flood said he doesn’t think he’ll be jumping in the lakes anytime soon.

“I see the lakes and I see the geese on them every day and the water fowl that come and go, the ducks and so forth,” Flood said, “And you realize that even if it’s a clean body of water, there’s a lot of water fowl out there and I’m not interested in participating in the aquatic life with them.”