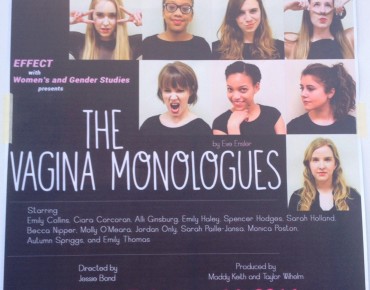 This flat-out, honest line began “The Vagina Monologues” and laid out what the rest of the show would highlight: that private part below the belt.

“The Vagina Monologues” was hosted by the Elon Feminists for Equality, Change, and Transformation (EFFECT) and Women’s and Gender Studies Feb. 14 in Whitley Auditorium.

The show is based on interviews with multiple women about the perhaps-touchy subject, conducted by Eve Ensler and documented into the play, “The Vagina Monologues.”

According to director Jessie Bond, thousands of venues perform the annual show on Valentine’s Day as part of Ensler’s V-Day Campaign. The international campaign collects money for organizations that fight violence against women.

“[EFFECT and Women’s and Gender Studies] put it up because it deals primarily with women’s rights and women’s issues, and it’s probably the only show that exists in the world that is so very, very direct in talking about women’s issues, vaginas, and all of that,” Bond said.

Freshman Jenna Rohde believed the show highlighted female empowerment but did not expect the show to be “actually about vaginas.” She found the performance “hilarious … very moving at times.”

Bond said she hoped the performance would impact the audience the way Rohde was impacted.

“It’s a very, very taboo subject in our culture,” Bond said. “It’s not even socially acceptable to say the word ‘vagina,’ and so I think what’s really great about this show is it gives people a forum, a jumping off point with which to talk about their own experiences with vaginas.”

Bond hopes the show affected the men in the audience as well.

“I think that they just don’t have a lot of awareness of a lot of the issues that get talked about in the show,” she said. “I think it is an eye-opening experience for people of any gender.”

The attendance, a full house of both men and women, came as a bit of a shock to Bond.

“I was a little surprised,” she said of the Valentine’s Day performance. “Surprisingly, tons and tons of people came.”

She credits the turnout to the social media campaign headed by junior Emily Haley and promotion by the show’s producers.