Broadway graduate returns to his roots 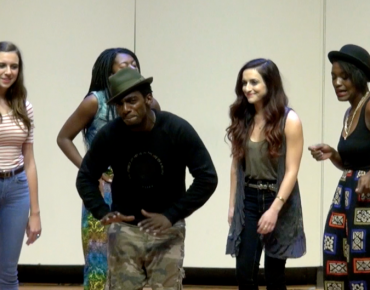 A Broadway performer goes back to his roots to where it all began this past week to give music theatre majors the chance to put on a unique type of show. It’s called Spoken Word, a poetry reading that was taken over by the Department of Performing Arts.

Daniel Watts, a Broadway performer and Elon graduate of 2004 worked with 10 Elon students to put on the performance, “As We Journey from Mind to Mouth…” The unique part about this performance is that the students played themselves.

“Feeling the emotion on stage was probably the easiest, it was getting up on stage to do it was the hardest part,” Watts said.

Sophomore JJ Niemann centered his piece around being gay.

Other pieces focused on themes like racism, self-loathing, eating-disorders and love. Watts knew getting the students to open up and play themselves was going to be hard.

For some it was easy.

“I wrote my own stuff. It was my own life. If I can’t perform my own life than what can I perform you know?” said performer Gerald Caesar.

However, some student performers said it was harder to open themselves up in front of an audience.

“I suggested that there is someone out there who is also going through the same thing you’re going through so it is probably best that they hear it as well…and they trusted me with it,” Watts said.

Watts wasn’t there to direct the students in their performance. He also gave perspective on life after college and told them what was important to remember.

“Find the happy. We make our dreams the end game and we sometimes we forget that and in focusing on the dream, it’s the journey in trying to reach our dreams that actually makes us who we are,” Watts said.

Watts will take his own advice as he decides his next career move.