Alamance Regional Medical Center is less than four miles down the road; its services are frequently used by students and faculty for care. In a recent rating issued by the LeapFrog Group, a non-profit organization that rates more than 1400 hospitals nationwide, Alamance Regional scored a D dropping from its C rating the year before.

The LeapFrog Organization evaluates hospitals in 28 different patient safety categories. Alamance Regional scored below proficiency in 21 of those categories, one of the categories is hand washing.

“I would certainly say that we were surprised,” said Dennis Campbell, Cone Health Vice President of Nursing and Patient Services for Behavioral Medicine.

Alamance Regional Medical Center scored a 21 in hand washing, with the best hospital rating being a 30, and hospitals score on average a 28 for this category. The hospital scored below average in other categories, as well. The following are the categories and ratings that Alamance received below average gradings. 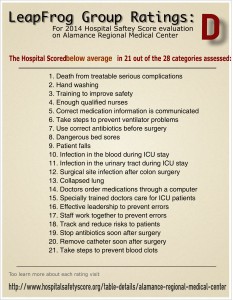 Campbell said there are parts of the survey that misrepresent the Medical Center.

“I would tell you that quality care is being given all across Cone Health, do we get it right every single time?” he said. “No, and neither does any other hospital or healthcare organization across the country, I think sometimes when you take the snapshot in time of what an organization looks like you will find variation.”

Alamance Regional issued a statement that the data used by The LeapFrog Group was old, but Elon Local News reached out to LeapFrog which released the statement, “The hospital safety score uses the most recent publicly available data, and we are the nation’s leading advocates for receiving more up-to-the-minute data from the federal government.”

Although the data used for the rating dates back to 2011, it is the most up-to-date data that the government provides. LeapFrog also welcomes hospitals to submit their own data. After last spring’s rating of a C, Alamance Regional took that opportunity and submitted its most recent data to the organization for this evaluation, hoping to increase its grade but with the newly volunteered records the hospital came up even lower than before.

Campbell said that having a ‘one-size-fits-all’ grading system doesn’t take into account the volume of patients that ARMC sees each day in comparison to other hospitals.

LeapFrog released a statement that its survey measures errors, accidents, and infections that patients acquired at the hospital. The organization said all hospitals should avoid these errors, regardless of its size.

Although Alamance Regional received a poor grade, Campbell said it allows room for growth and improvement.

Regardless of the grade Alamance acknowledges that, “It is an opportunity for you to look at yourself and get better, I would not say that ARMC is the worst place to come and get care. I would say that ARMC like any other organization even in our region is always looking to get better, and oh wow heres an opportunity for you to do that because here are a couple of things that you can work on to get better,” Campbell said.

When asked what initiatives were being put into place to increase the rating that come out again in the spring, Campbell said Alamance Regional concentrates on the patients it serves.

“We are more focused on every patient, getting it right with every patient than we are spending a whole lot of time trying to fix a specific question on a survey,” Campbell said.

Senior Kirby Browning has visited the medical center three different times since 2011 for various reasons and said that this goes beyond a grade and is more of a matter of patient safety.

“It’s not like school where a D+ you still pass; no, you have patients in there that are getting sick and are dying,” Browning said.

Alamance Regional wasn’t the only hospital in the area to score below proficiency; only 23 out of the 77 evaluated North Carolina hospitals received an A. To see the breakdown of each category that the hospital was rated on visit the hospital safety score website.

The LeapFrog Group will be posting another grade in the spring, and Campbell says other ratings done on Alamance Regional for a comparison are CareChex, Premier, Consumer reports, and HospitalCompare.gov