Danish pop star hopes to make it in America 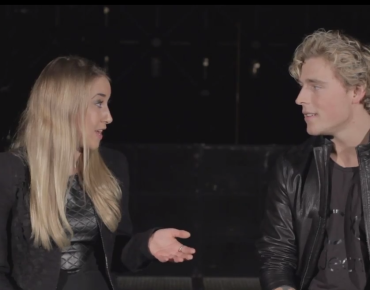 I recently returned from a semester abroad in Copenhagen, Denmark and was able to sit down with one of the country’s most famous singers.

Thousands of teenage girls lined up eagerly for hours in the harsh Denmark cold, a giant line snaking around the concert venue “Vega” in Copenhagen. Many even camped out, sleeping in tents for 48 hours just so that they could snag front row seats for the Danish pop star Christopher.

“He means everything to us. He is amazing,” one fan said.

What is it about this 22-year-old singer that has gained so much national attention in Denmark? It must be more than his good looks and charm. Besides being incredibly talented and producing music that will make you want to get up and dance, Christopher has a natural like-ability.

Despite being one of Denmark’s most famous singers right now, his passion and authenticity are evident.

“I always just do what I want to do. I don’t think too much about what the people want or what I should be doing,” Christopher said. “I just play what I want to play!”

But while this pop star may be an idol in Denmark, he has his sights set a bit higher.

“I would really love to make it in the States, and I feel like it’s possible. I always had that confidence, like I can do it,” he said.

Making it as a star in the the United States is an arduous endeavor. It takes a huge effort, as well as a combination of several factors out of the artists’ control. How will a singer from Denmark, a country with a population of 5 million, break through to the music industry in the States and gain attention from a country of 300 million consumers with thousands of artists trying to do exactly the same thing? Christopher thinks his role in Denmark is unique and can attract national attention that way.

“I really feel like I can bring something new to the table. It’s the first time in a long time that a boy my age has come forward and has been like a ‘teenage idol,’ we never really had that here. And I think that’s probably what makes me stand out,” he said.

In terms of his music, Christopher thinks it has a universal appeal.

“It is just good vibe energy, optimistic pop music and it just makes you happy,” he said.

In Danish media, Christopher has been referred to as the “Justin Bieber of Denmark.” But he doesn’t feel like he’s compared to him as much anymore and is inspired by other American artists.

“I would to be the kind of artist that Bruno Mars and Justin Timberlake are. It seems like they don’t take themselves too seriously, they make a little bit of fun of themselves and it just seems like they’re having a good time and I’m just making music and I love that! I love that vibe,” he said.

And the 22-year-old said he is ready for the commitment, and even the crazy fan culture that comes with being a star in the USA.

“I’m totally prepared for that. Let’s go! I mean I’ve seen a documentary of Bieber and One Direction and that fan culture over there is like the things I’ve been going through over here times 10, I mean let’s try it,” he said.

Watching him perform, it is evident that he connects with his fans and makes an effort to make them all feel special. He makes eye contact with fans in the crowd and is dedicated to meeting as many of them as he can. He even knows who some of his most loyal fans are.

“I know a lot of the fans because, especially like the front row it’s the same 50 people,” he said. “It’s nice to see familiar faces.”

He also says connecting with them via social media has been huge for his success and thinks it could help continue his career internationally.

“The social platforms have been very important for my career, especially with the young teenage fans,” he said. “They’re really active on social media and it’s just a great way for me to interact with my fans. I post everything myself and almost every day.”

Christopher says that things are just starting to pick up. He is working on his third album, which will be released in 2015 and he just recently returned from China, where his song “CPH Girls” is number two on the charts.

“Within the past couple of months, things have been taking off a little bit and it’s really exciting. A lot of good things are happening right now,” he said.

Although he has a dream to become a huge star in the USA and internationally, Christopher says he will always stay true to his Danish roots, holding onto the humbleness that he’s grown up with.

“I will always have that with me. It’s a big part of who I am. We have this thing here called ‘Janteloven’ which is like, ‘Don’t think you are something just because you’ve become someone,’ and I think that is really important to remember, to stay who you are no matter who you become,” he said.

About the author: Sky Cowans

Sky Cowans is a senior broadcast journalism major. She is currently an evening news anchor for ELN. Originally from Beverly, Massachusetts, Sky is passionate about health and fitness. She is also a group exercise instructor for Elon Campus Recreation and enjoys teaching power yoga. Last fall, Sky lived in Copenhagen Denmark for four months where she studied cross-cultural communications. She also serves as a Global Ambassador for Elon. Sky hopes to pursue a career in either broadcast news or health and wellness journalism.