Hillary Clinton rallies in Charlotte on night before Primary 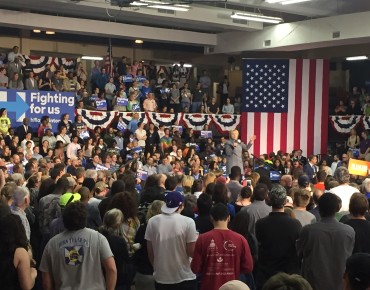 “I am determined that I am going to do everything in my power to create the opportunity for every child to live up to his or her God-given potential,” Clinton said. “That to me is what’s at stake in this election.”

One of the first things Clinton addressed was her opponent Bernie Sanders and his promise to make college tuition free for everyone.

“My opponent goes around talking free college for everyone, but there’s a couple of problems with that.” Clinton said. “I have a plan for debt free tuition and it is achievable.”

Clinton said her plan is to help the middle class get a college education and to refinance college debt for the average person.

In addition to addressing college education, Clinton talked about the public education system as a whole.

“Imagine that we have a good teacher in a good school for every child in every zip code,” Clinton said to rousing applause. “I believe that public education needs a little TLC.”

Clinton attacked her Republican opponents by mentioning that the last time a Republican was in the White House, America faced the worse economic crisis since the Great Depression.

“We’re going to have to imagine what we can do to break down the economic barriers and then, if I’m so fortunate to be the Democratic nominee, to lead a campaign on the indisputable fact that the economy does better with a democrat in the White House,” Clinton said.

She attributed the fact that five million homes were lost and nine million Americans lost their jobs in the early 2000’s under leadership of George W. Bush and credited Obama for fixing the economy. 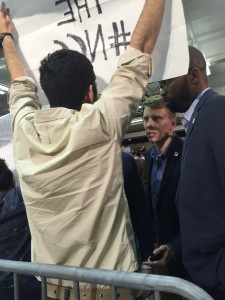 “The president-elect had to spend his time digging us out of the hole the Republicans put us in,” Clinton said.

After talking about public education, Clinton moved on to gun control and the importance of stricter gun control laws.

“It is just beyond my understanding how we can allow 33,000 people a year to die from gun violence,” Clinton said. “I know that we keep suffering these killings and everyone is heartsick, but nothing changes.”

Clinton also talked about the necessity for equality among people of all people including minorities and women.

“I thought that battle had been fought and won in the 1960’s,” Clinton said.

Above all, Clinton addressed the need to work together.

“None of this can happen unless we work together. Unless we decide we would rather be united than divided,” Clinton said. “I believe we are better than what we are hearing every night on television”

Clinton pledged that if elected, she will work as hard as she can to find common ground but also stand her ground.

While the crowd erupted into cheers periodically throughout the speech, three protestors were shouting as well. The protesters were holding up signs and screaming “stop deporting Central American children.” The protestors were escorted out of the Grady Cole Center but not before handing members of the media info sheets with information on their cause.

After the rally the protestors were stationed outside of the center and refused an interview with ELN.

The North Carolina Democratic Primaries will take place on Tuesday, March 15. According to a High Point University Poll, Hillary Clinton is favored to win over Bernie Sanders with 58 percent of voter’s support.

Gary Grumbach contributed to this article

About the author: Brooke Wivagg