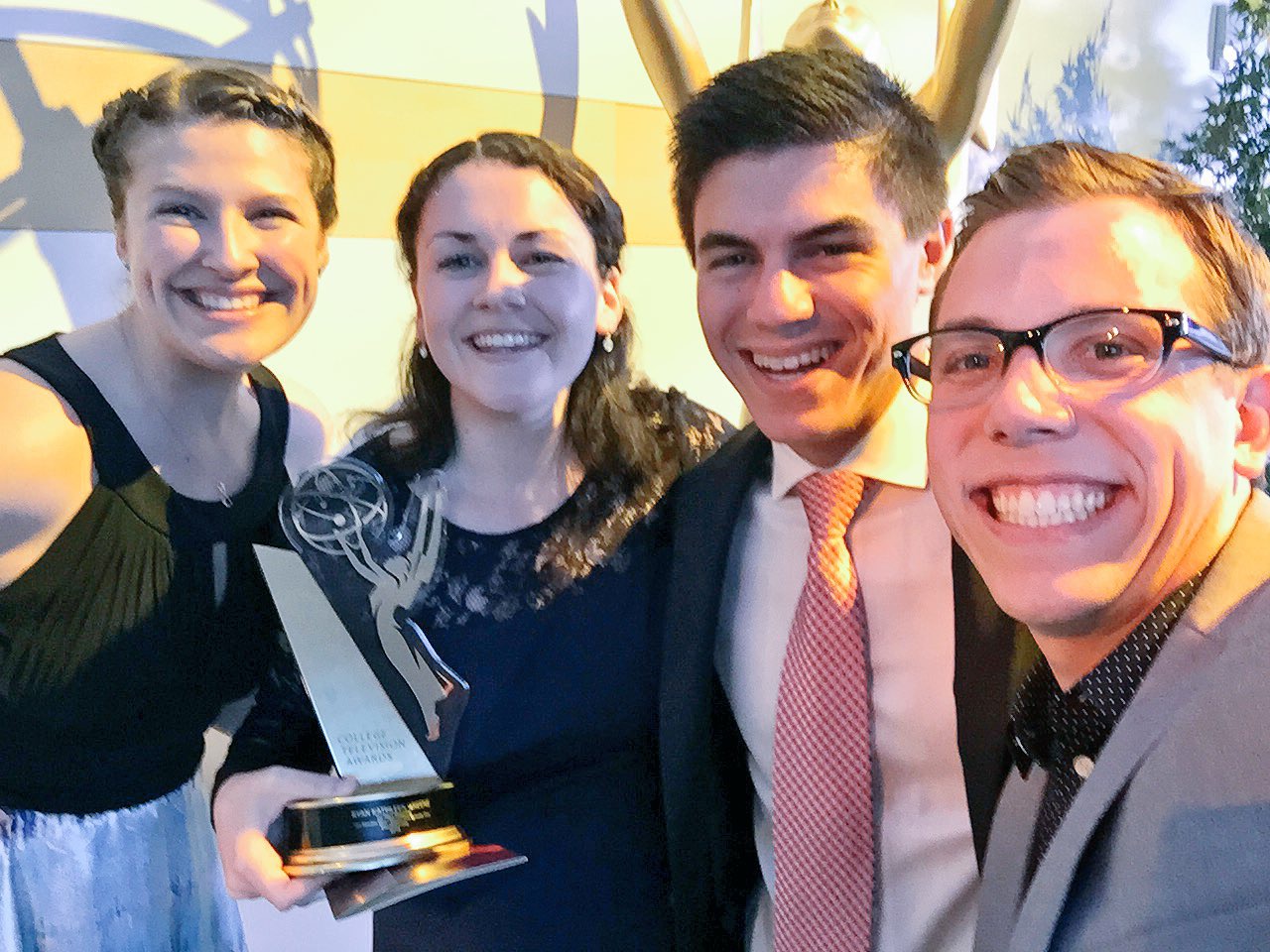 Elon University’s “30 Minutes” news program was awarded first place in the “Magazine” category of the 37th College Television Awards, presented on May 25 by the Television Academy Foundation in Los Angeles, California.

The half-hour show included exhaustive reporting on the topics of post-cancer breast reconstruction, American-Muslim culture in the 21st century and one man’s attempt to revitalize downtown Burlington.

During her acceptance speech, Elon University alumna and former ELN Executive Producer Ryan Kathleen Greene ’15 was humorous and honest with the audience.

“I’m quickly learning why they told us to write a speech because I wrote it on my hand, and I got very nervous and sweated it right off,” said Greene, who produced the award-winning entry. “I don’t know why I’m telling you guys, but whatever.”

This honesty Greene displayed at the College Television Awards – informally known as the College Emmy Awards — is also seen in the “30 Minutes”, created in the spring of 2015 as part of Associate Professor Rich Landesberg’s “60 Minutes” master class.

In her acceptance speech Greene, who now serves as a Marketing and Creative Production Associate at ABC News, acknowledged many of the individuals who influenced the program, including Michael Radutzky, chair of the School of Communications Advisory Board and senior producer of “60 Minutes.”

During the university’s 2015 spring break, students from the master class traveled to New York City to meet with Radutzky and “60 Minutes” Executive Editor Bill Owens, who spent more than an hour reviewing and critiquing the 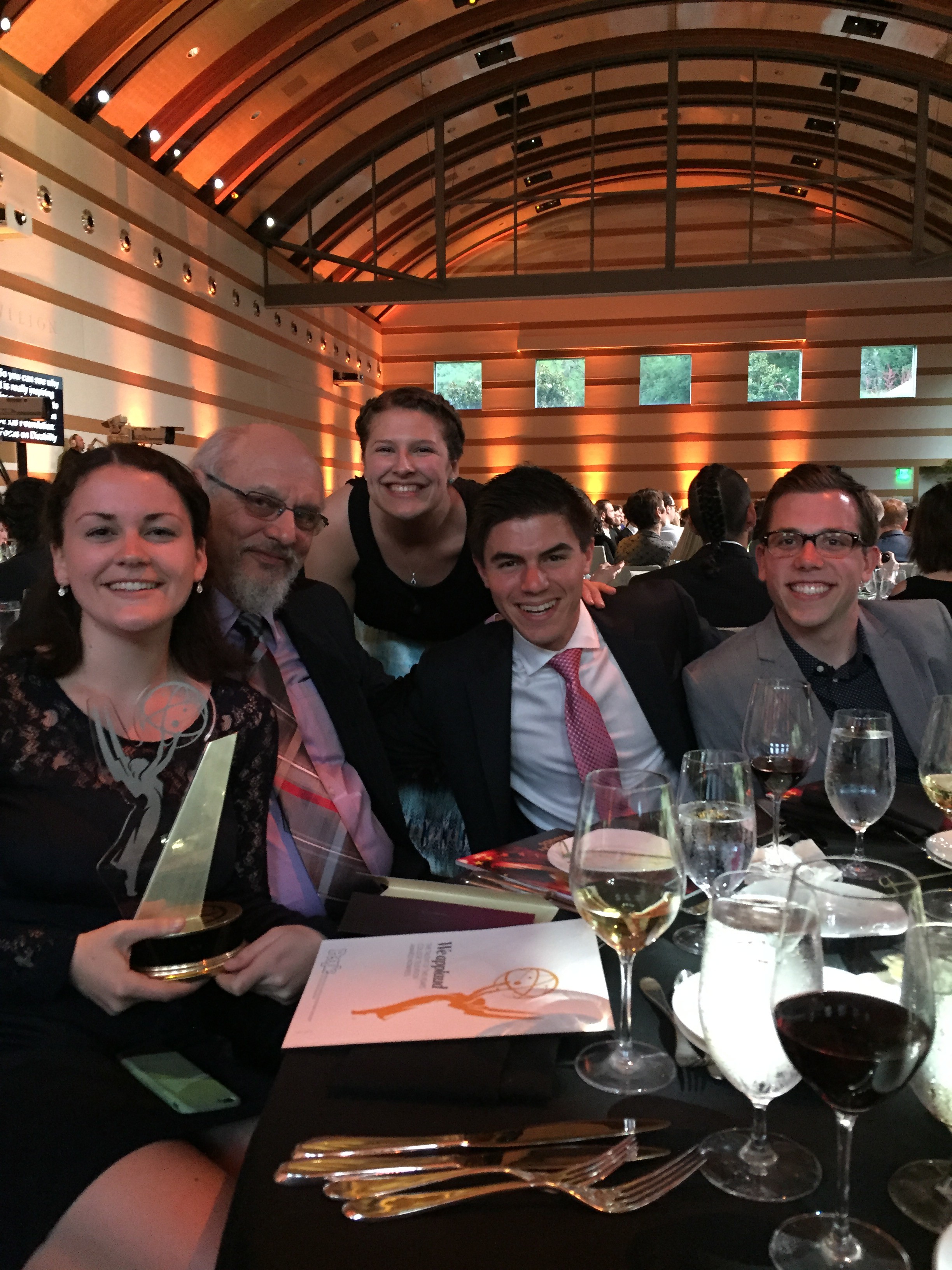 Associate Professor Rich Landesberg and the representatives from the “30 Minutes” program pose with the Television Academy Award. Landesberg said, “All of these individuals brought different aesthetics, different news sense and different ideas to the table. They stretched themselves. But they all had the same basic drive, which was to tell a compelling story.”

Greene thanked Radutzky for “ripping our stories apart and letting us put them back together.”

After graduation, most of these students parted ways to work in the real world, not realizing a year later, they’d be brought back together by this project. “There’s something special about continuing these relationships even post-graduation,” Mezerski said. Mezerski was a former intern for the Television Academy Foundation and now serves as a Production Associate for ABC News.

“Everyone put exhaustive work into the stories,” Mezerski said, remembering their semester-long efforts a year ago.  “I’m beyond thrilled for the team and for the characters represented in these pieces.”

Halperin, former ELN News Director and now a Multimedia Reporter at WOWK in West Virginia, also recalls the same group effort. He said, “There were no slackers, everyone was dedicated to the cause.”

Halperin acknowledges that it “could have been very easy to just care about the story your individual group was working on. But when it came to class discussions about the other pieces, everyone was just as interested in helping the other groups as they were their own. Collaboration was key and this was by far the best and most professional group I worked with at Elon.”

Every student involved with this master class and “30 Minutes” piece all repeated the same words: “team,” “passion,” and “proud.”

Greene says it still hasn’t “hit her” that they actually won, but is very grateful to represent her alma mater and the School of Communications. “Taking the ’30 Minutes’ class was one of my favorite Elon memories,” Greene said. “Concluding my Elon undergraduate career at the College Television Awards is something I will never forget.”