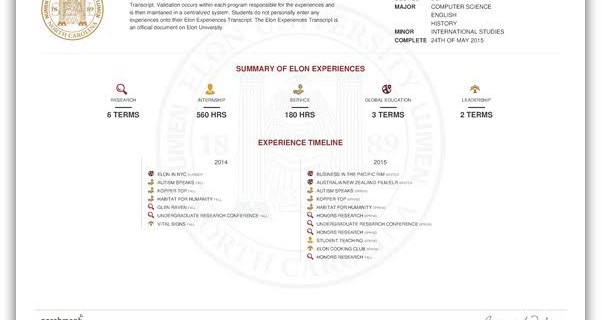 The Office of the University Registrar is introducing a new virtual transcript that will be available to all students. According to an email released on Monday by Smith Jackson, “The Office of the Registrar is pleased to introduce you to the next iteration of your Elon Experiences Transcript the Visual Experiential Transcript.” The Visual Experiential Transcript, or Visual EXP, is a visual toll that will enable the user to present all of the Elon Experiences that have been accomplished in a simple, visually pleasing online document. “The Visual EXP will allow students to present this information to potential employers and graduate school admission officer in a medium made for the digital age.

Beginning on May 18, students will be able to preorder a Visual EXP for free through the transcript-ordering site. This site also represents the same information as the regular Elon transcript, but adds more visuals and ascetically pleasing features. Spring 2016 graduates will receive a complimentary copy with their electronic diploma after graduation. 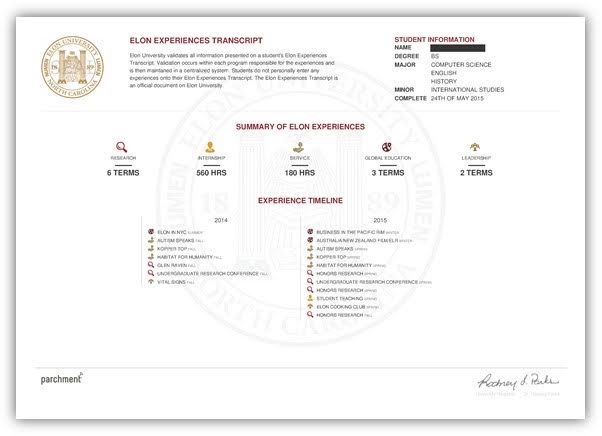 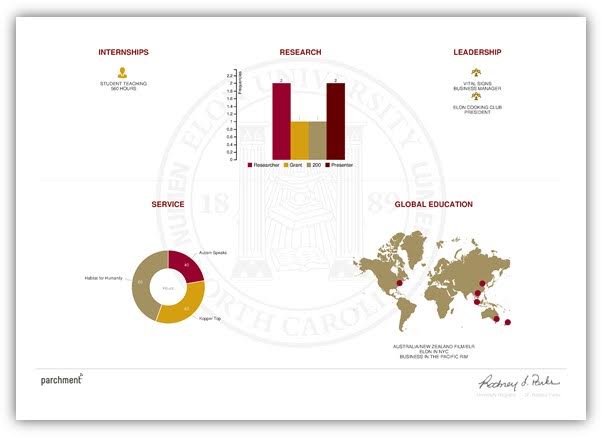 The Visual EXP has been in development for the past six months. In 2015, the American Association of Collegiate Registrars and Admissions Officers (AACRAO) and the National Association of Student Personnel Administrators (NASPA) selected eight colleges and universities across the country to develop a project to create modes for a better more comprehensible record of such experiences. The project, funded by a $1.56 million grant from the Lumina Foundation, puts Elon with Stanford, University of Maryland, and the University of Southern California as recipients of this type of program.

The design team of Dr. Paul Miller, Ms. Julie White, Mr. Evan Heiser, and Dr. Rodney Parks are credited with creating the Visual EXP. According to the email,“[they] designed the visual to breathe new life into your co-curricular transcript and pave the way for further innovation.”

This story was contributed by Tyler Patchen.