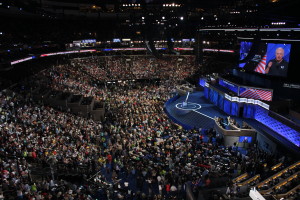 PHILADELPHIA — The 2016 Democratic National Convention has given Millennial Democrats an opportunity to voice what characteristics they want in the next president.

Brown University student Melissa Cairo is a first-time delegate from her home state of California. She chose to become a delegate to get the word out that there are plenty of Millennials supporting likely nominee Hillary Clinton.

Cairo believes presidential candidates should be reviewed as if they are applying for a job. She’s decided Clinton is “by far the most qualified person for the job.”

Another delegate, Jade Hamilton, of West Virginia, is going to be a first-year law student at West Virginia University. Hamilton chose to become a delegate because of her politically outspoken family.

“My grandparents were delegates to many conventions, and I was just sitting around one day and I was wondering what it would take to be a delegate,” Hamilton said, “And I started to look into it. You have to run at the county level and get elected at the state convention and I thought ‘Let’s do it.’”

Hamilton “Stands with Her” and said she is hopeful of the positive future Clinton could offer as president. Likewise, she sees Clinton as “a strong and powerful woman” who has given Hamilton hope for her future.

Rachel Harrison is an intern with The Washington Center and says regardless of who is the nominee, she will vote for the Democratic Party.

“I was originally a Bernie supporter and I still am, but Hillary is our presumptive nominee. She is who I will vote for because beyond anything I am a Democrat and I will support the Democratic Party,” Harrison said.

Stephanie Kulikowski, another Clarion student and intern for The Washington Center, has noticed a difference when it comes to the way Clinton adapted to many of Sanders policies.

“She’s adjusting herself and her beliefs to fit the beliefs and wants of her electorate,” Kulikowski said.

And on the top of that list Democratic millennials believe key social issues such as LGBT and women’s rights take precedence.