New details on the arrest of Alexis Gray

On Nov. 25, 2012, Elon University Campus Safety and Police was alerted that Gray, 18 at the time, of Holland, Pa., was on her way to Elon University. According to the police report, she was going to the residence of her ex-boyfriend, then Elon freshman, Greg Seelagy. 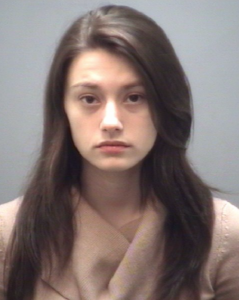 Seelagy told officers that Gray was suicidal and he was afraid that she may harm herself on campus. According to the narrative in the official court records, Gray’s father told officers that he had a suicide letter from his daughter.

According to the narrative, Ray noticed Gray’s SUV turning around and exiting the Danieley Center parking lot. Ray followed Gray’s car to confirm the license number. He pulled her over in front of the East Haggard Apartments, after recognizing her 2005 gold Acura SUV.

A second officer arrived shortly thereafter. While walking around the vehicle and looking inside the car, he spotted a box in the back of her car labeled “Remington Firearms.”

The officers then opened the car door and asked Gray to step out of the vehicle, and she complied, according to the narrative.

The officer conducted a search of Gray and the vehicle.

FOUND IN GRAY’S VEHICLE:
-.22 caliber semi-automatic rifle
-Black piece of rope, approximately 7 feet in length in her pocketbook
-Box of .22 Winchester ammunition containing 41 rounds
-12-inch knife with an 8-inch blade
-Open box with “Remington Firearms” written on it
-Handwritten note in a green and yellow “sippy-cup”

The .22 semi-automatic Remington rifle, along with a box of .22 Winchester ammunition, were purchased by Gray at a local Walmart in Burlington. Receipts for these purchases were found in her car, according to the narrative.

Gray’s car was impounded and she was transported to Elon Campus Safety and Police where she was then placed under arrest and made aware of her charges. A warrant for Gray’s arrest was issued for one count of possessing a firearm on Elon’s campus. These charges remain pending in state court.

Documents with this new information about the arrest of Gray, who is also being charged in federal court with travelling to commit a crime of violence against a dating partner, were submitted to the United States District Court in Greensboro on Nov. 13.

Be sure to stay with Elon Local News as we continue to cover this story.