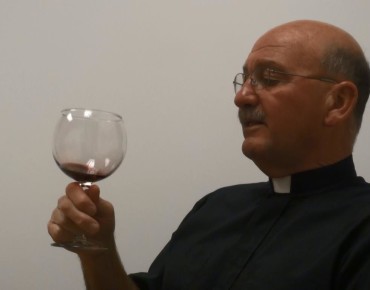 There are some nights when Father Gerry Waterman comes home and likes to drink one of the wines in his collection. He may choose a red wine or a white maybe even a blush. Other nights he chooses one of the wines he crafted himself.

Waterman has been involved in wine making since he was about five years old when his grandfather first showed him the art. According to Waterman, his grandfather would take him down to the basement to craft the beverage. Years later Waterman learned the trade himself and started wine making as a hobby during the beginning of his ministry.

But that hobby became a business when Waterman paired up with a winery in Connecticut to produce wine for his parish’s community.

“It started by making just regular table wine so initially we made a blush and I made a white and those were the first two wines at the winery,” Waterman said.

But the business slowly expanded as Waterman got creative with the fruits he used in his wine. He remembers one day walking through the vineyard where the winery got its grapes and noticed several trees with black walnuts.

“I wonder if I could make a wine,” Waterman said. “So I grabbed enough of the walnuts to make an essence to infuse into the white wine. Sweetened it up and uh brandied it up to fortify it and it became a gold medal seller. We named it Evangelico.”

Evangelico sold well but eventually Waterman was asked to drop the wine making business and to move to a new parish but his wine making days didn’t stop there.

Around the time he first came to the Elon area, Waterman became a consultant with a local winery. At some point they asked him to help them make a wine with some extra fruit they had. After some experimenting, Waterman produced a port for the winery to sell. When the winery eventually went out of business they left the remaining cases of port to Waterman who gave bottles to anyone who donated to the church.

“An alumni family liked it so much, they asked for a case and they handed me a thousand dollars,” Waterman said. “A thousand dollars for twelve bottles, five hundred millilitres bottles of port. They liked sitting on their porch in the evening sipping port. Our port.”

Since his time ended in the wine business, the art of wining making has become another hobby that Waterman enjoys whenever he’s able. According to Waterman, the wine making process can be relatively simple and anyone could do it. He didn’t go into how he made his gold medal selling wine but says that a simple wine could be made with grape juice, yeast, a balloon and time to let it ferment. Just put some yeast in the juice, place the balloon over the top and let the balloon expand and deflate (a process that could take up to three weeks) and the product is a cheap homemade wine. And as with regular wine making, Waterman reminds people that the most important part is keeping everything fresh.

“Everything got to be sterile. You need to be clean about everything. Because the slightest bit of contamination ruins your product. Bacteria is your enemy when it comes to making wine.”

Waterman treasures the wines he made and keeps some of them as mementos never to be opened. He says the wine making may be a long process  but the end result makes it all worth it.

“You see that it’s become this refined liquid that you know once it’s in the bottle is going to age nicely and delight so many people that that’s the best part I think.”

However, without anywhere to practice his craft, Waterman hasn’t made wine in a year and half so he shows his appreciation for wine in another way. By collecting it.

Waterman has 151 bottles of wine in his collection that he keeps in his house to be enjoyed by himself and others. He loves all aspects of wine, respecting everything from the craftsmanship to the taste.

“Wine is living. It’s organic and develops and changes, again, much like a human being. And it’s something to be admired and respected,” Waterman said.

While he enjoys drinking wine himself, Waterman thinks of wine as a way of bringing people together. He’ll regularly meet with friends at Oak House to sip wine and talk theology and things they find important. Or he sits down with his housemates and offers them a taste from his collection.

“They know I collect wine, they see the wine collection, and when I bring a bottle down to share with dinner they’ll look to see how much of it’s gone and I’ll say, ‘I’m not drinking it, I’m just testing it.’ ‘Yeah, yeah, yeah’”

There are those who might consider Father Gerry Waterman a “wine snob,” himself included, but he thinks that just shows how the beautiful, refined liquid can be more than just another alcoholic drink to some.