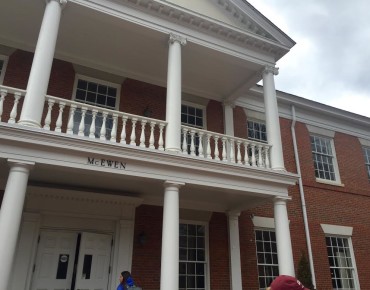 According to a White Paper from the President’s Student Leadership Advisory Council, the new McEwen Dining Hall will have the motto, “A place where the Elon community will gather, engage and nourish.”

There will be at least five new food options in the renovated McEwen Dining Hall, expected to be complete by Fall 2017, according to Elon Dining.
A new concept called, “Home & Away,” is set to offer home-cooked style meals and pasta options.
“Green & Grains” is a concept that is to serve meals including salads with protein, as well as other vegetarian dishes, according to the President’s Student Leadership Advisory Council.
A dining option called “Knead,” with options similar to what students may find at Panera Bread, is also set to be a part of the renovated McEwen Dining Hall.
“Clean Juice,” a smoothie and cold-pressed juice location is set to be available through Elon Dining’s Meal Exchange program.
According to the report, Student Government Association Senators were provided with a survey on Elon Dining options. The report says Senators mentioned that Elon lacks “Burgers, Italian food and Asian cuisine.”
To solve the Asian cuisine need, plans are in the works for there to be a food option called “Pei Wei,” a fast-casual division of P.F. Chang’s China Bistro Inc.
As we have previously reported, Chick-Fil-A will be staying on campus, while Acorn Coffee Shop and Varsity Sports Grill will be closing their doors
In terms of seating throughout the renovated McEwen Dining Hall, plans are for “comfortable seating” and private meeting rooms, as well as long family-style tables.
Posted in:  Food, News